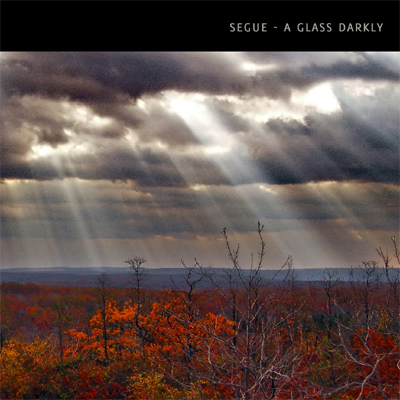 Segue is Jordan Sauer from Vancouver, Canada. His sound is a patchwork of textures and tones with a focus on the interplay of timbre. These sounds are created through the blending of various instruments (12-string guitar, piano, violin, melodica, glockenspiel, various percussive instruments) and incidental found sounds.

His recent release "a glass darkly" is an absolutly beautiful, meditative and touching piece of music. Haunting melodies, guitar- and piano-miniatures, fieldrecordings, string-drones are blended together carefully to a 22-minute expedition into a deep sea, a unknown forest or a pristine clearing just before sunset. Every sound evolves slowly from a little bud to a magical blossom, which fades away to become another flower again.

A constant evolution, giving you the feeling of warmth, depth and oneness.

Segue is Jordan Sauer who makes his home in Vancouver, British Columbia, Canada. He’s no stranger to the netlabel scene having had his affecting electronic music released previously by Autoplate, Kyoto Digital, Silent Season, and on his own Duckbay label.

If you’re familiar with any of Jordan‘s previous recordings, then you’ll quickly realize that this new work represents a fairly significant departure from these preceding musical endeavors. Arising in part because of a personal desire to rise above his “own, self-imposed limitations and boundaries," "a glass darkly" is a wonderfully sanguine and harmonious ambient composition that realizes this desire. According to Jordan, the inspiration for this work is the enduring metaphysical argument concerning how our vision of reality is imperfect - obscured in part by the limitations of our senses. This is reflected in the title of the piece which is based on a popular bible verse which begins - “For now we see through a glass, darkly [...]” (1 Corinthians 13:12 ).

You’ll note several transitions within "a glass darkly" as the piece is the result of bringing several compositions together and then blending them into a single mix. As the transitions take place you’ll detect a noticeable shift in tones, timbres, and textures, but the continuity of the overall optimistic, warm, and melodious ambiance is never disturbed. The instrumentation for "a glass darkly" consists of twelve string acoustic guitar, violin, melodica, toy glockenspiel, pen whistle, voice, and various percussive instruments which were recorded and then mixed with field recordings. In many instances, secondary events were culled from these recordings and became essential parts of the compositions.

With "a glass darkly", Segue offers twenty-two minutes of gentle, alluring, beatless ambient bliss. A noteworthy addition to his personal catalog of releases and one right at home on the Resting Bell netlabel.